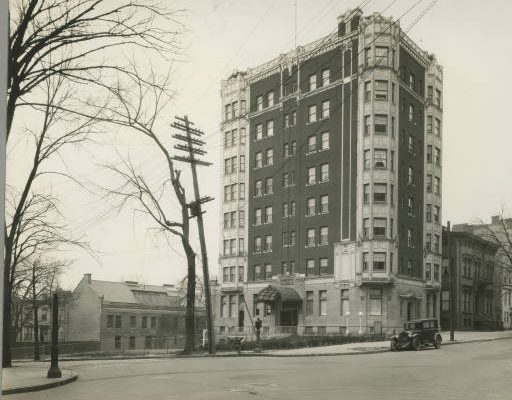 The Fort Frederick Apartment building, which was picked up and moved an entire city block in the mid-1920s, is the subject of a special Friends of Albany Public Library program on Wednesday, Jan. 18, at 6:30 pm at the Pine Hills Branch (517 Western Ave.). This local history program is free and open to the public.

Noted Albany architect Harris Sanders and historian Tony Opalka will discuss the Fort Frederick building, which was built at Swan St. and Washington Ave. in 1917. Just nine years later, the eight-story building was picked up and moved to a site on State St., near the State Capitol, in order to make way for construction of the Alfred E. Smith building.

According to Albany Architecture: A Guide to the City, a team “jacked the eight-story structure up two feet and placed it on several hundred steel rollers laid on railroad tracks. It was then gently propelled 350 feet south by two teams of horses and two winches at a rate of seven feet a day.” The move was completed without disrupting utilities, so residents were able to sleep in their apartments every night during the project.

Sanders is a well-known architect, and Albany native, who founded his firm in 1955. He is responsible for many area structures, but perhaps is best known for the North Broadway building atop which the 25-foot Nipper the dog statue sits. Sanders also designed the Frank Lloyd Wright-inspired Chicorelli Funeral Home at 331 Delaware Ave., which reopened in 2010 as the Delaware Branch of Albany Public Library.

Opalka is Albany city historian and a historic preservation program analyst for NYS Parks, Recreation & Historic Preservation. He is a treasure trove of city history and lore, and often partners with the library for local history programs and lectures. Opalka holds regular office hours at the library’s Washington Ave. Branch in the Local History Room on the 1st, 3rd, and 4th Monday of each month from 6:00-7:00 pm and the 2nd Saturday of each month at 2:00-4:00 pm.